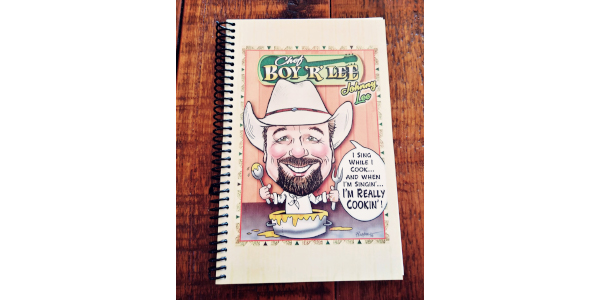 While we’re at home and hunkering down, one of the things we’ve noticed is how much our favorite comfort foods are doing just that…making us feel a whole lot better. Food has always been a big part of The Country Music Cruise, from the endless gourmet meals and 24/7 snacks, to the cooking demonstrations by our artists, so it’s no surprise that we’re always up for trying out a few new recipes.  We took a look around and found some utterly delicious ones that our artists recommend and wanted to share them with you.

Mickey Gilley’s Texas Cookbook and Favorite Recipes has been on our kitchen shelf for many years and we know we can never go wrong with his chili.

Brown the meat, then stir in the onion and garlic. Continue to cook until the meat is nice and tender.  Add the rest of the ingredients and simmer for 45 minutes.

Mickey’s longtime pal Johnny Lee is handy in the kitchen, too. He’s even published his own “Chef Boy ‘R’ Lee Cookbook”, which is available for purchase here.

2 cups half and half

Combine 2 cups of heavy cream, 2 cups of half and half and 1 cup of French vanilla coffee creamer into a bowl.  Break the bread into pieces and add them in, using your hands to squeeze the bread as it falls apart and mixes evenly with the liquid.

In a separate bowl, mix the eggs, vanilla, cinnamon and brown sugar.  Add the bread mix and stir. Then add in the raisins.

Bake at 375˚ for about an hour.  While baking, make the whiskey sauce.

Melt the butter in a saucepan. Add in the sugar until completely melted with the butter. Add the whiskey and stir until warm.

Pour the whiskey sauce over the warm bread pudding and serve it up.

Our longtime host, and friend, Lorianne Crook is no stranger to the kitchen. She hosted a cooking show and welcomed countless stars to Crook & Chase to make healthy, mouthwatering meals. Here’s a recipe she made onboard a recent Country Music Cruise during a cooking demonstration.

Melt butter in a large pot over medium-low heat. Add the onions and sauté until lightly brown. Add apples, potato and squash.  Season with salt and pepper.  Cook until the apples and potato begin to soften, about 8 minutes.

Stir in sage and flour, then add apple cider.  Stir until thickened.  Add broth and milk, cover and bring to a boil.  Reduce heat to a simmer and cook, stirring until the potatoes are soft, about 8 – 10 minutes.

In batches, puree the mixture in a blender until smooth and creamy.

Return pureed soup to the pot.  Add the grated cheese and stir until melted and smooth.  Season with salt and pepper to taste.

Ladle soup into bowls and sprinkle with chopped chives and crumbled bacon (optional).

1 Box-German Chocolate Bar (You will find it in the cake aisle at the grocery store. Look for green and gold wrapper. Grate this and put to the side for later)

Mix again, then stir in your bag of chocolate chips

Serves 4 (Double the recipe if needed)

Salt and pepper to taste

Increase heat to medium-high and bring mixture to a boil

Add pre-roasted cut up chicken to the pot

Reduce heat to medium-low, cover and simmer for 30-40 minutes.

Garnish with toppings before serving