Catching Up with Josh Turner 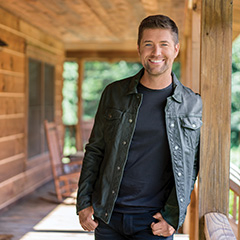 When the 2021 Country Music Cruise docks in Key West, everyone on-board will see a stellar performance from one of country music’s finest young performers, Josh Turner. Most of us still remember hearing Josh’s first single, “Long Black Train,” and thinking that the future of country music was in good hands. Here was someone who understood country music’s roots and branches, and kept it simple. His warm, enveloping baritone voice grabbed you, and just like country music’s greatest performers sold you from the first note. Since then, Josh has done nothing but grow his fan-base and make one great record after another.

Recapping what you probably already know, Josh Turner is from Hannah, South Carolina, and started his singing career in a gospel quartet. He came to Nashville to study at Belmont University, and, as he’ll tell us, landed a contract with MCA Records. But his big break came when the Opry’s general manager, Pete Fisher (who partnered the Opry with the Country Music Cruise, by the way) allowed him to sing one song on the show. Josh hadn’t even started recording his first album, but he sang “Long Black Train,” a song he’d written after listening to a Hank Williams box set. And that’s where most of us first heard or heard about Josh Turner.

If you polled folks on the Country Music Cruise, they’d probably say that classic country is Hank Williams, Merle Haggard, George Jones, George Strait… etc. Who would you add to that list?

Were there any artists that your parents or grandparents loved who really shaped your love of country music?

My daddy’s mama was a big fan of country, bluegrass, and gospel music. The artists she listened to, like Waylon Jennings, Roy Acuff, The Stanley Brothers, Johnny Cash, The Osborne Brothers, etc., laid my musical foundation. The only record my daddy owned when I was young was a Hank Williams greatest hits record. That also had an impact on me.

Is there a gospel song that you first heard growing up that still has special meaning or resonance for you?

“Without Him,” written by Mylon LeFevre, became my favorite gospel song when I was a teenager. It was first recorded by Elvis Presley, but I didn’t know that at the time. I fell in love with the simple, straightforward message in the song and how it cuts straight to the fact that without Jesus in our hearts and lives, we can do nothing and are lost like a ship adrift at sea.

You were living in South Carolina. Did you apply to Nashville’s Belmont University because Nashville was where you figured you needed to be?

I applied to Belmont for several reasons. My parents made me go to college initially. I didn’t want to go, but I was young and dumb at the time. They couldn’t afford Belmont for the full four years, so I went to Francis Marion University in Florence, SC my first two years. By the time I finished my stint at FMU, I had come around to the importance of a college education and had my sights set on Belmont, yes, because it was in Nashville and because it offered a degree in commercial music.

What did Belmont’s Entertainment and Career Development class do for you personally and professionally?

The entertainment and career development course opened several doors for me. Clyde Rolston was my professor and he talked extensively about the intangible and hard to describe “it” factor. An artist has to have “it” to be successful and have longevity in this business. The other things that happened as a result of that class is that I met a girl who introduced me to Jody Williams who signed me to a production deal, publishing deal, and got me a meeting to play a few songs for MCA Records that led to my signing a record deal. Oh, and the girl who sat behind me in class eventually became my wife!

The Opry is one of our partners on the Country Music Cruise. The show played a big role in getting you noticed. How did you get on the Opry without a record out?

I’d only signed my record deal a month before I played my Opry debut. It took some begging and pleading on behalf of Jody and myself, but Pete Fisher, the then general manager, relented and allowed me to sing one song the Friday before Christmas 2001 late in the show. I played “Long Black Train,” got two standing ovations and an encore and the rest is history!

Did many of your family and friends from South Carolina make it to the Opry for your debut?

Yes, I had lots of family and friends come for my debut.

The Opry is coming up on 100 years old. Why do you think it has survived and thrived?

Because of how devoted the artists and fans and industry professionals have been to it. It provides an opportunity for the fans to see all the many facets of country music in one place at one time. It’s a reflection of who we are as a country and as a people. It’s the music of rural and/or blue collar, hardworking Americans who want to hear stories they can relate to. The artists have done a great job at providing those stories, sounds and images for almost a century now.

One of your biggest hits, “Your Man,” was co-written by Chris Stapleton several years before he became a star. Have you ever talked to him about how that song gave both of you your first Number One hit?

I’ve known Chris a long time, but I don’t recall ever specifically having a conversation about that. I have sent him videos every time someone shows up on TV or somewhere singing “Your Man.” It’s a sign to both of us that we did something right

Which, of all your songs, has the most personal meaning for you?

“Long Black Train” is my most meaningful song. Beyond the fact that I wrote it, it was the song that got me my publishing and record deal, and it was the title track of my debut record, and the song I played on my Opry debut, and my first hit, and it helped me buy my first house, and has changed many people’s lives including my own.

Do you plan to have any new music out for the fans to hear around the time of the 2021 Country Music Cruise?

Could you say a few words to welcome folks to the 2021 Country Music Cruise?