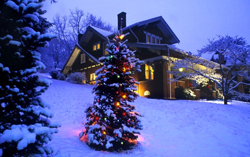 We’re already enjoying the Christmas season thanks to our Country Music Cruise artists. Not only do we plan to catch as many of them as we can on their holiday tours, we’ve also got all of their yuletide tunes lined up and ready to play as we celebrate with friends and family. Are you ready for some Christmas cheer? Here’s a little something to get you started:

Tracy Lawrence started his holiday fun a little earlier than everyone else this year, releasing a brand new Christmas album back in October. We sure hope he’ll be playing songs from “Frozen in Time” and maybe even a few from his 2007 “All Wrapped Up on Christmas” collection on his current tour.

We can’t think of anyone who enjoys this time of year more than The Oak Ridge Boys. They’re in the midst of their 29th annual Christmas tour, which wraps up on December 23 at the Schermerhorn Symphony Center in Nashville. Can’t get to one of their shows? Just grab a mug of eggnog, put on your favorite ugly sweater and play their 1982 album, “Christmas” from start to finish.

The Gatlin Brothers - Larry, Steve & Rudy – are on their own Country and Christmas tour until December 15, with lots of songs to choose from. The boys have released not one, but two holiday albums, “We Say Merry Christmas” and “Christmas with the Gatlins.”

Also on the road - John Berry’s Christmas Songs and Stories tour travels from Ohio to Tennessee, Georgia and everywhere in between while Linda Davis, famed for her Country & Christmas tour, performs classics and selections off her “Family Christmas” album.

We’re hoping Moe Bandy will sneak “A Cowboy Christmas” into the setlist of the Moe and Joe show in Shreveport on December 22 and that Johnny Lee will do “Santa Claus is Lookin’ For Love” when he performs at Huckabee in Nashville on December 18.

We love singing along at home to Pam Tillis’ “Just in Time for Christmas” and T. Graham Brown’s “Christmas with T. Graham Brown,” which includes holiday classics along with two songs he wrote himself. And then there’s Chuck Mead and His Grassy Knoll Boys’ version of Eddy Arnold's "Will Santa Come to Shanty Town” or his great spin on “Jingle Bells.”

Reminding us that the holidays are also for lending a helping hand, David Frizzell released “Barnyard Christmas” last year to benefit the Music City Animal Rescue. And Wade Hayes has a special kind of tour planned; he recently told Billboard magazine, “I’ve learned a few Christmas tunes and I’m playing with one of my best friends in Kentucky at a homeless shelter and a few days before that I’m playing a retirement center here affiliated with my church. It’s just a lot of fun and it kind of fills you up.”