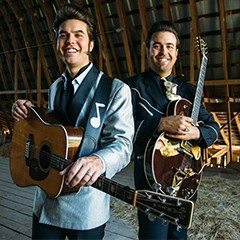 As young boys, Christopher and Taylor Malpass soaked up the music of their granddad’s phonograph records. Christopher earned his first talent show trophy at age 7, and Taylor was playing mandolin by the time he was 10.  In their teens and early 20’s they were invited by Country Music icon, Merle Haggard, to perform as his opening act. They traveled and recorded with Hag for the next 7 years. Currently fan favorites on RFD TV shows like Larry’s Country Diner and Country’s Family Reunion, the brothers are now coming into their own as they promote the work and music of the classic country artists they treasure while creating new music and making their own mark in the lineage of a rich American cultural heritage.