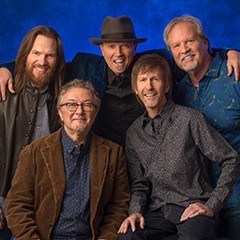 Since their debut on “Star Search” in the early 1980’s, Sawyer Brown has gone on to release 23 studio albums with more than 50 chart singles. In addition to the band’s success on country radio, the group has taken home CMA, ACM, CMT and MCN awards. However, Sawyer Brown is most known for their wildly entertaining live performances having played more than 4500 shows across the world. Sawyer Brown is a five-man band including singer Mark Miller, keyboardist Gregg “Hobie” Hubbard, lead guitarist Shayne Hill, bassist Jim Scholten, and drummer Joe Smyth.