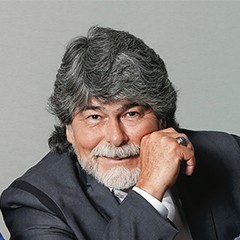 For more than 49 years Randy Owen has been the frontman and lead vocalist of the legendary group Alabama, the most successful and awarded band in country music history.  Randy and his cousins, Teddy Gentry and Jeff Cook founded the legendary band in Fort Payne, Alabama. The group signed with RCA Records in 1980, launching a career that, to date, has resulted in 53 gold-platinum and multi-platinum albums, an amazing 43 number 1 singles, and more than 80,000 million albums & singles sold.  ALABAMA has received more than 250 industry awards, including 8 Country Music Entertainer of the Year Honors, Albums of the Year, and Songs of the Year from the Country Music Association and the Academy of Country Music. They have won 2 Grammy Awards, 23 American Music Awards and 2 People’s Choice Awards. They still hold the record for having 21 # 1 singles in a row.  ALABAMA has a star on the Hollywood Walk of Fame, the Nashville Walk of Fame, and the Fort Payne Walk of Fame. The band was named Artist of the Decade by the Academy of Country Music and Country Group of the Century by the Recording Industry Association of America. In November of 2005, Owen and his ALABAMA bandmates received country music’s highest honor when they were inducted into the Country Music Hall of Fame.  Owen was also awarded the Ellis Island Medal of Honor in 2008, which honors US Citizens from various ethnic backgrounds for their outstanding qualities in their professional lives, while maintaining the richness of their particular heritage.

When he’s not on the road performing, Randy is a very successful songwriter and is busy operating his working cattle ranch, Tennessee River Music.  He also spends his time helping others. Although Randy has lent his support to many great causes over the years, St. Jude Children’s Research Hospital is most near and dear to his heart.  Having answered the personal request of the late entertainer, St Jude Founder Danny Thomas, Owen took the challenge. With the help of country radio and the country music industry, he has been the leading force of Country Cares for St. Jude’s annual fundraiser radiothon. The program which he helped create in 1989 has since raised over 800 million dollars. Randy also hosts the Randy Owen Celebrity Classic Golf Tournament, which has raised more than 1 million dollars for the Alabama Sheriffs Youth Ranches. Randy also co-hosts (along with the group ALABAMA) an annual songwriters show benefitting John Croyles Big Oak Ranch for the past 15 years.  The June Jam Concerts, created by ALABAMA, have raised over 10 million dollars for a number of different charities in Fort Payne and northern Alabama counties. The fund continues today with donations each year by the 3 members.

After the band’s farewell tour in 2004, the guys wanted to do an event in 2011 and use the group’s name to organize and headline two concerts to aid the 25 counties across the state of Alabama that were devastated by tornadoes. The Bama Rising Concerts raised more than 2.1 million dollars, and the Tuscaloosa Storm Recovery Show raised almost $200,000. As a result of getting the original band back together to help others, they realized how many people wanted to come see them in concert which prompted them to continue touring to this day. Owen also donates to various organizations annually through his June Jam Fund. In 2019 the band will celebrate their 50th anniversary.

In November of 2017, ALABAMA was asked by the 5 Living Former Presidents of the United States to headline a concert in Houston, TX, ONE CAUSE, to help raise funds for hurricane recovery damage in the United States and the Caribbean Islands.  The event and live television broadcast received donations from over 110,000 donors and raised 42 million dollars. Randy Owen is in the Songwriters Hall of Fame and has been honored with the Broadcast Music Inc. Millionaire Award twice for the songs he wrote, “Lady Down on Love” and “Give me one more shot,” both of which have been played over 1 million times each on radio and television.  Randy is married to his wife of 43 years Kelly Owen and they have 3 children, Heath, Allison and Randa. He is the proud grandfather of Asher, Kelson, Harper Rose, John Owen, Stella Grace and Hudson Yeuell.  Randy Owen continues to look to the future and his philosophy on helping others and music is “I feel that the greatest reward for doing is the opportunity to do More”.