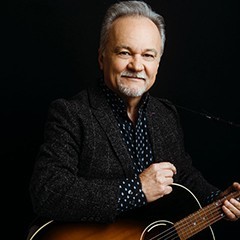 Whether requested by his loyal fans or heralded by fellow artists, the voice of Jimmy Fortune is one of those special instruments. His recognizable tenor has graced some of the biggest hits of Country music, earning the Virginia native a slot in both the hallowed ranks of the Country Music Hall Of Fame as well as the Gospel Music Hall of Fame.

Music has always been important in Jimmy’s life, as he first began performing with his father at local square dances back home. At the age of thirteen, he formed his first band – The New Edition – and the Jimmy Fortune story began. As an adult, he built a reputation for being one of the most talented and versatile performers in the Nelson County / Staunton area – becoming known as an artist who could sing anything, ranging from Country and Bluegrass to Rock and Roll.

In the early 1980s, word of his talent reached Lew DeWitt. Known as the tenor singer of the Statler Brothers, DeWitt heard Jimmy and walked away very impressed with the singer’s delivery. If that’s where Jimmy’s encounter with DeWitt had ended, that would have been fine enough. However, what he didn’t know was that Lew was in the early stages of Crohn’s Disease – which would force him to leave the quartet temporarily in 1982. DeWitt suggested that his partners in the group take a look at Fortune.

They did, and Fortune was hired. Unfortunately, by the end of the year, DeWitt had to permanently leave the Statlers, and the job became his on a full-time basis.

To say that he carved out his own place as a Statler would be an understatement. Encouraged to develop his writing talents, Fortune wrote and sang lead on many of their biggest hits. “Elizabeth,” “Too Much On My Heart,” “Forever,” and “More Than A Name On A Wall” are just a few of the Statlers’ hits that feature the Fortune name and voice. He also was part of the group’s award-winning TNN variety series that ran from 1991 to 1998 and played date after date on the road, bringing their legendary sound to thousands each year.