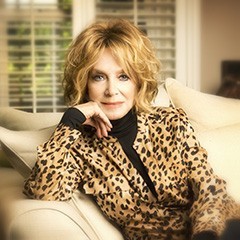 Among many accolades including awards from Billboard, Cashbox, and Record World, country music legend Jeannie Seely has achieved chart-topping songs as a solo artist, as a duet partner, and as a songwriter. Early in her career, Jeannie’s deeply moving vocals earned her the nickname of “Miss Country Soul” – a title that’s still used today.

Born in Titusville, Pennsylvania, and raised on a farm outside of nearby Townville, Jeannie was singing on local radio station WMGW at age 11 and performing on TV station WICU at age 16. Jeannie only had $50 and a Ford Falcon to her name when she moved to Nashville (upon the encouragement of friend Dottie West), but within a month Porter Wagoner hired her as the female singer for his road and television series.

Jeannie’s biggest dream came true when she was inducted as a member of the world-famous Grand Ole Opry, becoming the first Pennsylvania native to do so. Jeannie also became the first female to regularly host segments of the weekly Opry shows. She’s credited for wearing the first mini-skirt on the Opry stage, as well as for changing the image of female country performers. On September 16, 2017, Jeannie celebrated her 50th anniversary as a member of the Grand Ole Opry.

With Opry member Jack Greene, Jeannie recorded a series of successful duet hits and launched one of the most popular road shows in country music history. For over a decade Jack and Jeannie performed at venues from New York’s Madison Square Garden to London’s Wembley Arena.

Along with placing records on the Billboard country singles chart for 13 consecutive years, Jeannie also served as a radio disc jockey on her own Armed Forces Network Show, traveled on military tours throughout Europe and Asia, made numerous appearances on national television shows, published her own book of witticisms titled Pieces of a Puzzled Mind and starred in several major stage productions including Always, Patsy Cline and The Best Little Whorehouse In Texas. Jeannie appeared in Willie Nelson’s Honeysuckle Rose movie and sang on the platinum soundtrack album, and also appeared in the movie Changing Hearts.

Jeannie’s recording of “Don’t Touch Me” not only topped the country music charts, but also earned her a Grammy Award for the “Best Country Vocal Performance by a Female”. It is ranked at No. 97 in the book Country Music’s 500 Greatest Singles published by the Country Music Foundation, and it’s also included in the book The Stories Behind Country Music’s All-Time Greatest 100 Songs.

Jeannie has been known throughout her career as an individualist, as well as for her infectious humor. Despite personal and career setbacks that range from a 1977 near-fatal auto accident to a devastating flood in 2010 in which she lost her home, car, and personal belongings, Jeannie Seely has remained a survivor with her sense of humor intact.

From her 1966 Top 10 Billboard album The Seely Style to her recent self-produced album Written In Song (consisting entirely of songs she’s written), Jeannie’s recordings have spanned six decades and provided enjoyment to country music fans all around the world.