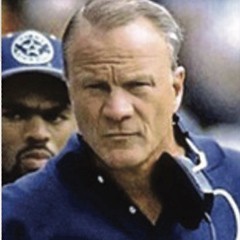 Barry Switzer is one of the most respected and successful coaches in college and professional football, one of only three head coaches to win both a college football national championship and a Super Bowl. During his 16 years at the University of Oklahoma, the Sooners played in the Big Eight Conference championship every year from 1973 to 1980, won eight of 13 bowl games, and 54 players were named All American, with Billy Sims winning the Heisman Trophy. In 1994, the Dallas Cowboys hired Switzer as head coach and just one season later the team won Super Bowl XXX. To this day, he holds the best win percentage of any Cowboys coach, having also guided the team to three division titles and two conference championship games.

Switzer is a member of the College Football Hall of Fame and the Oklahoma and Arkansas Sports Halls of Fame, and received the Jim Thorpe Lifetime Achievement Award in 2004. He served as Honorary Head Coach of the Oklahoma Special Olympics for over 40 years and in 2015 received the National College Football Awards Association’s Contributions to College Football Award for his Special Olympics work and his role as founding organizer of the Swing for Sight golf tournaments raising hundreds of thousands of dollars for the Society for the Prevention of Blindness. Switzer received the National Sports Media Association’s Bear Bryant Lifetime Achievement Award, was named Coach of the Year by Sporting News and has been a football analyst for Fox Sports and XM Satellite Radio. Switzer hosts Coaches’ Cabana (available on Cox throughout Oklahoma and via livestream at www.coachescabana.com) during OU football games, inviting former players and coaches to watch and analyze games. He remains a popular figure on the University of Oklahoma campus and in the community, where he is affectionately referred to as “The King.”