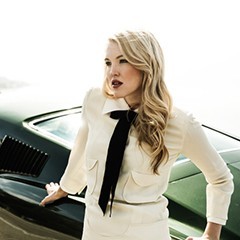 Songwriter. Singer. Banjo player. Ashley Campbell juggles all three roles, armed with the ability not only to dream up a modern country song, but to deliver it, too.

Already known for her work alongside her father, country legend Glen Campbell — who, during his final years as a touring musician, leaned heavily on his youngest daughter as a banjo player, keyboardist and harmony vocalist — Ashley is now stepping out on her own. Her music is a mix of her wide-ranging influences, combining the old-school country sound popularized by her father during the '60s and '70s with contemporary Americana, rootsy folk and country-pop. Glen Campbell's longtime fans may hear something familiar in Ashley's melodies as she embraces these similarities while distinguishing herself as a talented frontwoman.

Growing up, Ashley's parents encouraged her to sing and play the piano. She did both, adding the acoustic guitar to the mix once she hit high school. A theater kid with comedic chops, she also landed roles in local musicals and improv groups, eventually heading to college as a theater major during her late teens. When a director cast Ashley in a role that required her to learn the banjo, though, she fell in love with the instrument. Inspired, and with the help of her godfather, legendary banjo player Carl Jackson, she began mastering her banjo technique, then started writing her own songs. No wonder Glen asked her to join him on his farewell tour not long after she graduated college, a tour that would eventually take his band — Ashley included — on a three-year ride around the world. The banjo sounded timeless, reminding her of the music she'd heard as a child.

Ashley kept writing new material during her days on the road. By the time her father retired from touring in 2012, she was ready to make her introduction not only as a sideman, but as a solo artist in her own right. Dot Records, an imprint of the Big Machine Label Group, was ready, too, signing Ashley to a roster that also includes Maddie & Tae, Steven Tyler and Drake White. She is currently working on her debut record. All of the tracks — including "Remembering," a poignant tribute to her Dad that doubled as the first single of her career — were either written or co-written by Ashley, who also played multiple instruments throughout the recording process. The goal wasn't to create a perfect-sounding album featuring the best session musicians from Nashville. The goal was to be authentic and real, shining a light on a do-it-yourself artist who's carved out her own sound.

Ashley Campbell is a multi-talented entertainer. A singer and songwriter who plays her own instruments. A newcomer with years of heavy touring under her belt. There's no denying her iconic country pedigree, but Ashley is attracting the spotlight these days with her style, talent and a unique sound all her own.